Light was a prolific and accomplished artist. He painted many water colours of his adventures and travels. Sadly many were lost in a fire at his surveying hut . Many prints were sold of his paintings. He also did many self portraits. 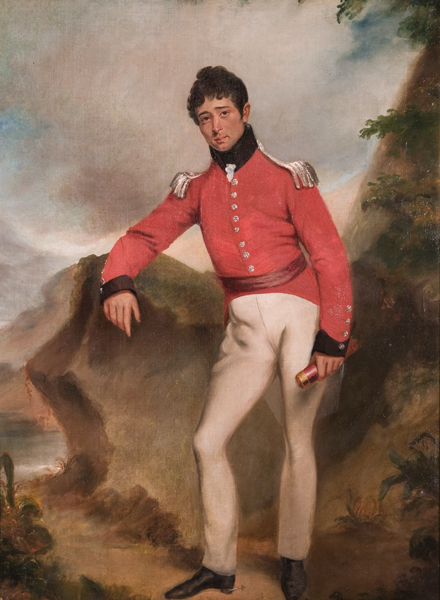 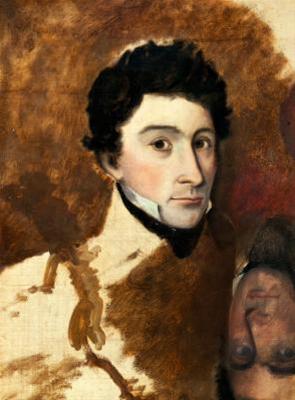 Self portrait on his death bed Note the earlier attempt upside down on the right. 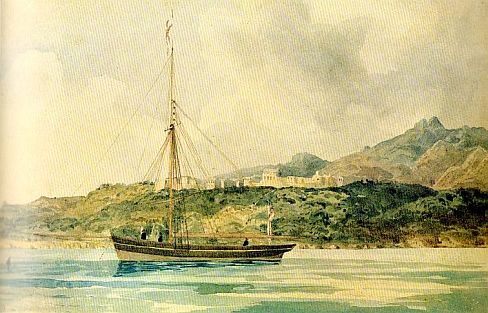 The "Gulnare" a 36 ton cutter that light bought from Rev. G Tufnell of Sudbury in 1827. Fitted out & re-registered at 43 tons he sailed her down the Spanish coast and into the Mediterranean. Here she is in the Bay of Naples. 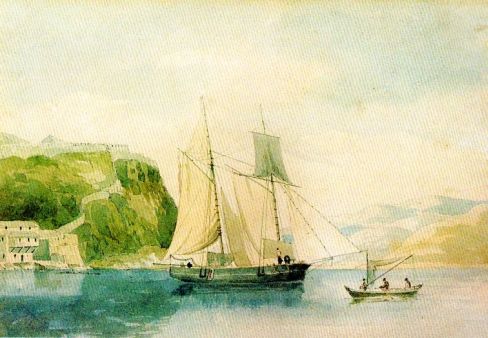 The "Gulnare" in the Mediterranean. With Mary his 2nd. wife he stayed on the yacht until December 1830..over 3 years. 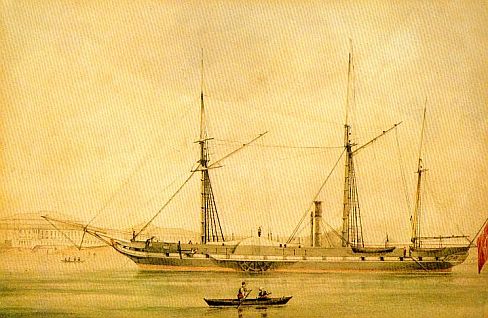 On September 18th. 1834 light sailed from London in command of the steamer with sails "Nile". She was built for the Egyptian navy to tow warships in and out of Alexandria harbour . The 908 ton vessel was 183 feet long. On board for the delivery to Egypt was Captain John Hindmarsh who was to play an impotant part in Light's life. 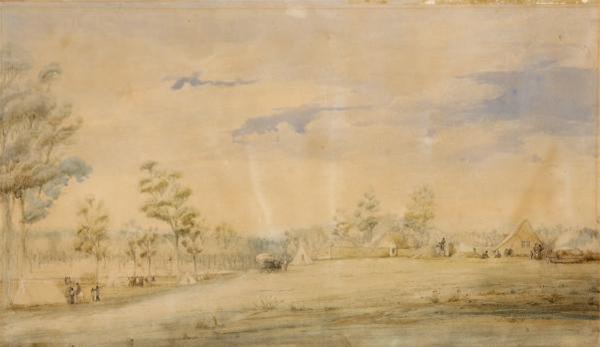 Light's original watercolour of the prints below 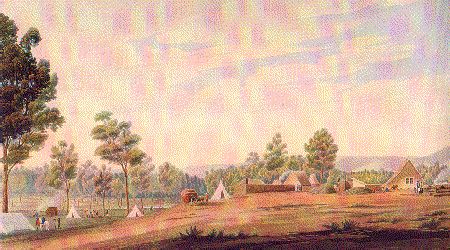 The Commencement of Colonization of South Australia. Showing temporary offices on the corner of North and West Terraces. Here Light had a wooden office next to James Hurtle Fisher's the resident Commissioner. On January 22nd. 1839 the day after light's return from Barossa Valley Fisher's hut caught fire and both buildings were destroyed. Light lost most of his diaries and paintings. 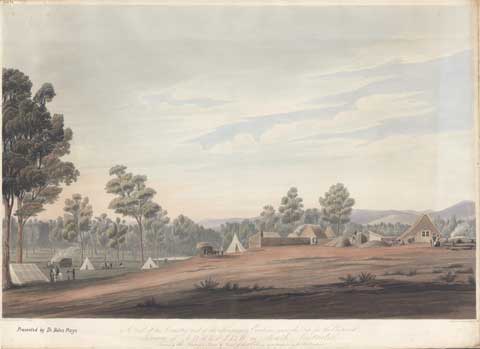 A print of the above

The first settlement in south Australia. Light painted this in January 1837 in parlands to the NE corner of Adelaide where the cattle market was to be. 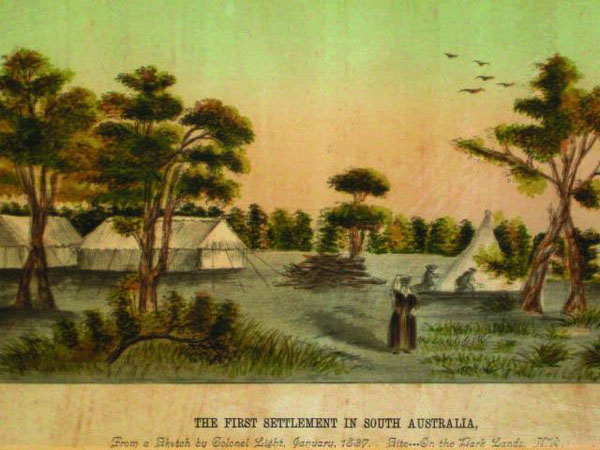 A crude lithograph by Galbraith & Son of the above.

Under pressure by the arrival of settler ship "Africaine" in November 1836 chose Glenelg near Holdfast Bay as the site for the city. In December Governor Hindmarsh arrived withe the settler ship "Buffalo" and proclaimed the new colony Glenelg after the Secretary of State for the Colonies . This painting dates from June 16th. 1837. The 2 18 pounder carronades brought ashore from the Buffalo are still in Glenelg. Glenelg Bay from a different angle to the above..may not be by Light 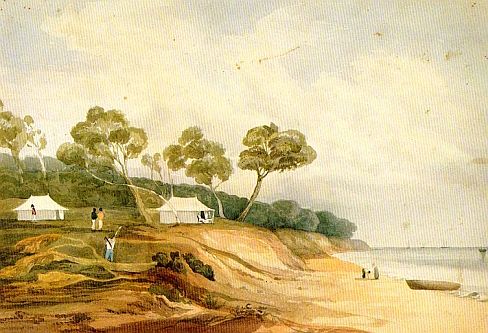 Rapid Bay. Light was unimpressed with Kangaroo Island as a site [lack of fresh water] On September 8th he sailed the Rapid out of Nepean Bay to explore the Gulf of St.Vincent. That afternoon he landed here and was enchanted. 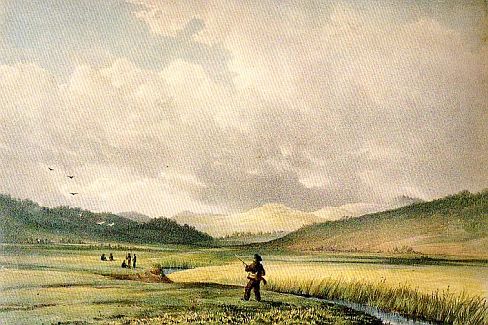 Rapid Valley South Australia from a spot called the Garden .Light set up a base camp to explore St.Vincent Gulf searching for a harbour. In this spot they grew crops for the settlement. 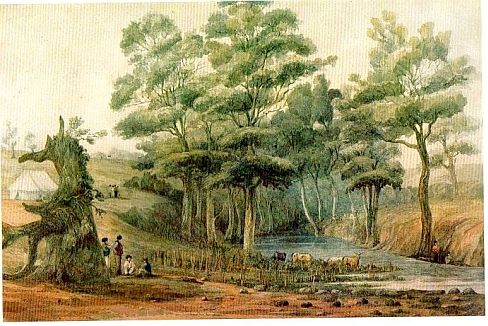 The Para about 25 miles north of Adelaide. The special survey party stopped here on January 13th. Para Pass [ford] or Dead Man's Pass named for a runaway sailor who starved to death and whose body was walled up in the big tree left but wild dogs got to it. Finished February 22nd. 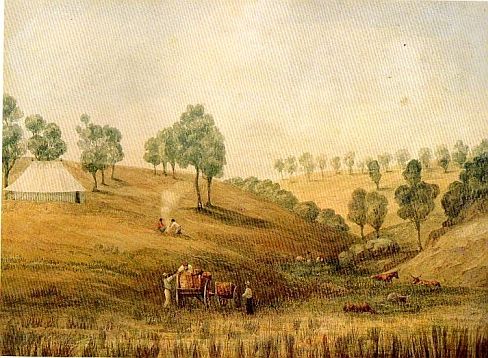 Mr. McLaren's Party January 11th 1839 About 14 Miles North of the Para Pass. The party seeking special survey sites turned north from the Barossa Valley and made early camp here. The next day would be too tiring for the weakened Light who stayed and painted this. Finished March 14th. View at Yankalillah. A week after landing at Rapid Bay Light went to the north examining coves and valeeys. He wrote " there is a beautiful stream of fresh water running into the sea". This is near the mouth of the Yankalillah river. 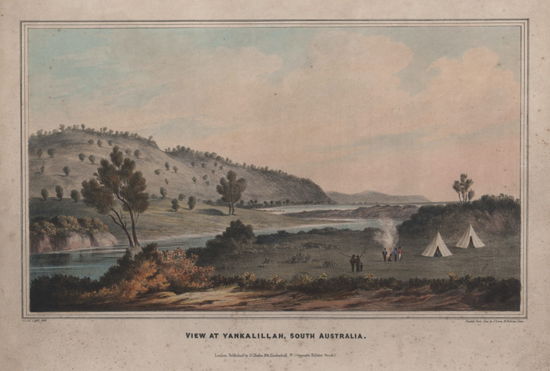 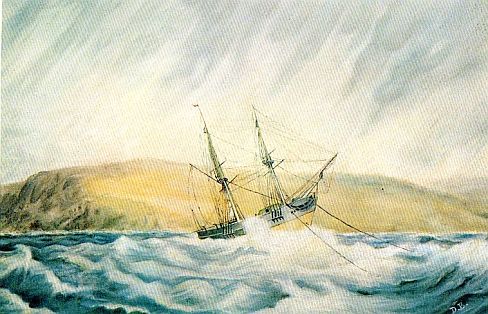 The Brig Rapid In A Gale Of Wind. Light sailed this brig of 162 tons and 23metres length from London but his illness led to a late arrival only just before the colonists and caused many problems later. Lights original painting disappeared. Walter Stevenson made a copy in 1870. This is an oil made of that copy by a Miss Bice [see D.B.] Light describes the storm in his journal October 12/13th 1836. 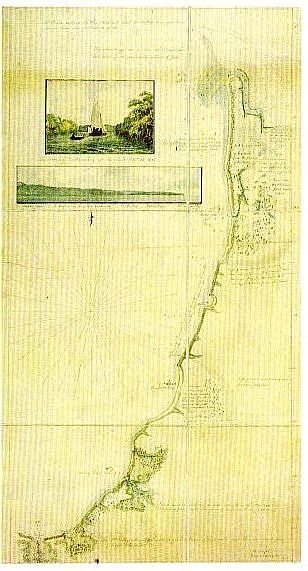 The East Coast Of Gulf St. Vincent. This is the first mainland chart that Light made November 3rd 1836. 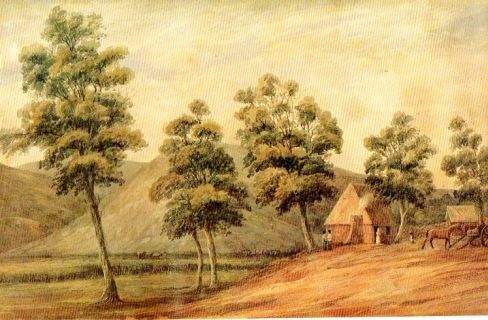 Messrs Fisher And Hancock's Station Near The Gawler Range. In January 1839 the firm of Light, Finniss and Co. were asked by the South Australia Co. to help select special Survey sites in the Barossa area. They camped here on January 8th at the junction of the Little Para River and Gould's Creek. On March 6th after noting "natives tried to set fire to my house" he finished this painting. Bank Of Soth Australia, North Terrace Adelaide. This bank developed from the South Australia Co. Edward Stephens arrived on the Coromandel in January 1837 and set up as Cashier in a tent at Glenelg. The tent moved here in April.This is now where the Gateway Hotel stands. Commencing The New Wharf [may not be by Light]. Light may have painted this in 1838 of the landing stage of the old port. View In Port Adelaide South Australia..about a mile below the present landing looking up the Port River. Painted in Aust 1838 showing the 240 ton David, 510 ton Henry porcher, 245 ton Goshawk, 327 ton Eden and 501 ton Emerald Isle. Light had requested more staff; this was refused and he was told to continue just a runnong survey. He resigned on June 22nd. The Eden arrived 2 days later bringing his former deputy Kingston to take over..most of Light's staff resigned on July 2nd. Distant View Of The Landing Place And Iron Stores At Port Adelaide With The South Australian Company's Storeship Sir Charles McCarthy At Anchor. This ship was stranded in Holdfast Bay in October 1837. The wreck was bought for whaling but was used as a floating depot due to the difficulty of landing goods here. View Of The South Australian Company's Fishing Station And Cape Rosetta, Encounter Bay. Light went with Commissioner Fisher to sort out troubles between rival whaling stations. Captain Crozier of HMS Victor reported a "splendid harbour" so Hindmarsh urged for the capital to be moved here. Light reported the harbour was too small and 3 ships had run aground in December 1837. The print of this was very popular in London. Mount Lofty can be seen in the distance The Buckinghamshire In Holdfast Bay. The last of Light's paintings. She arrived in Adelaide March 31st 1839 bringing 512 settlers..she was of 1,468 tons.